Why do I have bacterial regrowth in my distribution system?

Your raw water is high in biopolymers which may serve as substrate.

Is my flocculation process exhaustive in removing humic substances? I want to reduce AOX and THM further.

The position of ”your” humic substances is in between aquagenic and pedogenic fulvic acids. A further reduction should be possible.

Why is the DOC of ground water X so high?

All DOC is humic matter of pedogenic origin, presumably originating from a fossile A horizon.

The fundamental difference is the absence of biopolymers in ground waters.

In lakes, biopolymers originate from algae and exhibit a low N/C ratio. This material is primarily polysaccharidic.

In ground waters biopolymers should be absent. If not, then either a hydraulic contact to a surface water or a high microbial activity in the aquifer can be inferred. 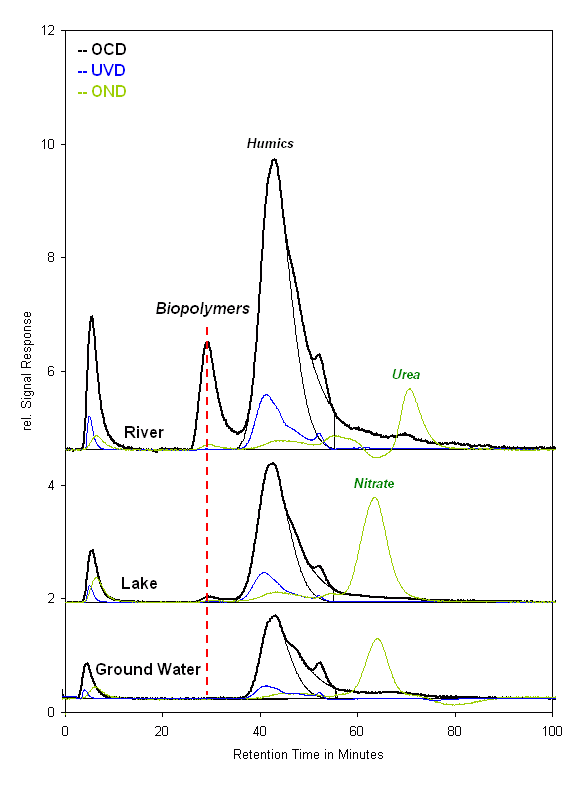 Variability of NOM in tap waters

We did a survey on a few Chinese tap waters which showed high variability: 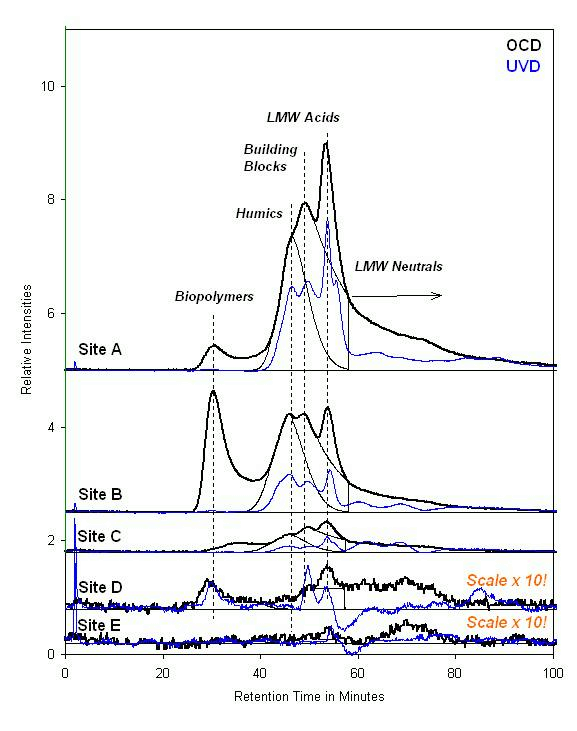 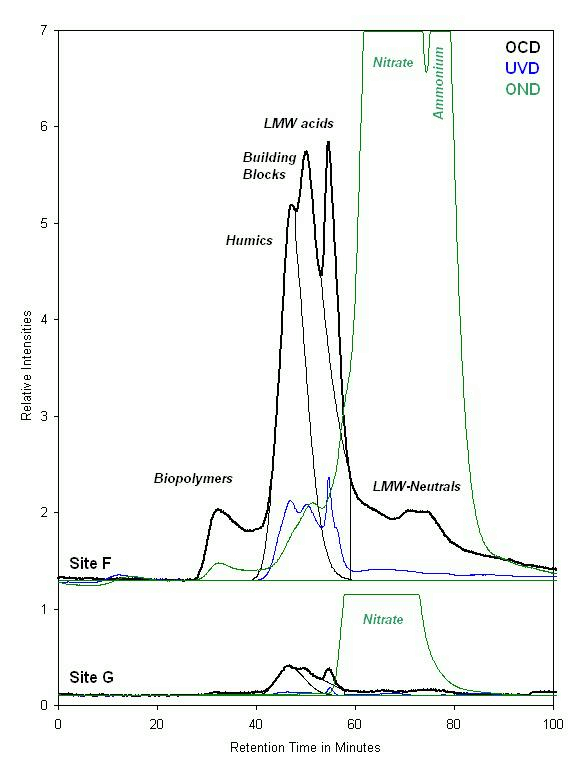 Impact of flocculation on NOM

Flocculation removes selectively humics and biopolymers. The higher the pH, the less humics and the more biopolymers are removed. Example shows situation after addition of FeCl3 which is shown in the UVD. 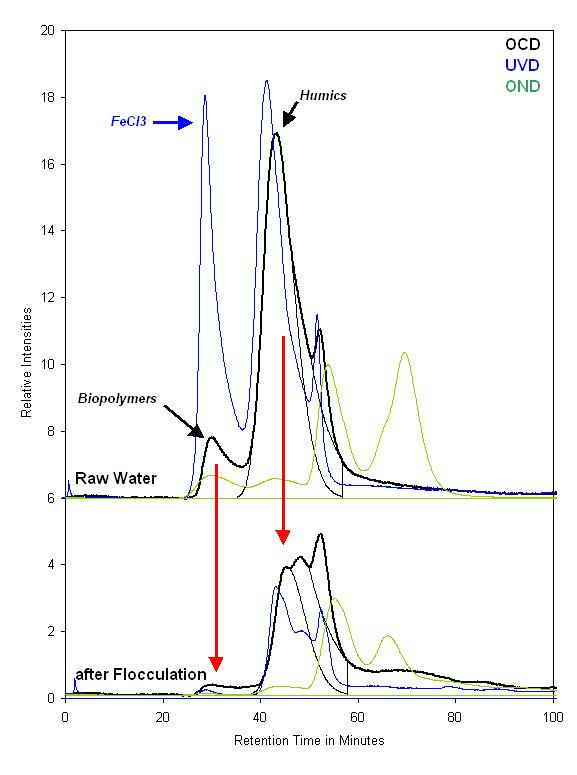 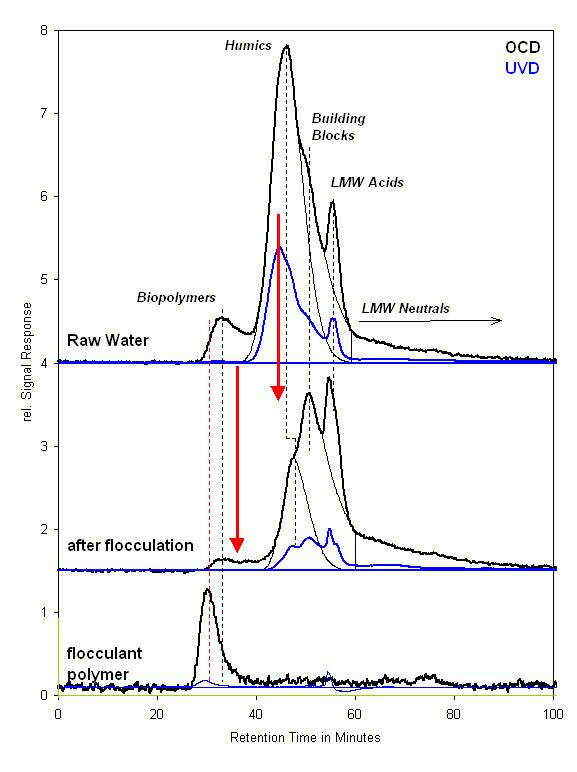 Ground waters are free of biopolymers. GW 1 is high in DOC (around 3 ppm). GW 2 is lower in DOC (around 1,5 ppm) but contains two compounds x and y which are usually not found in natural GWs. They could reflect contaminants or biodegradable NOM of recent microbial activity. 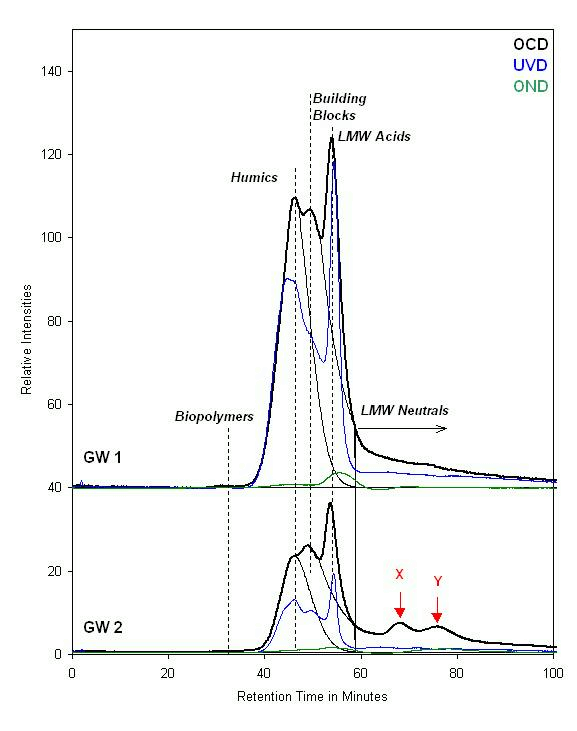 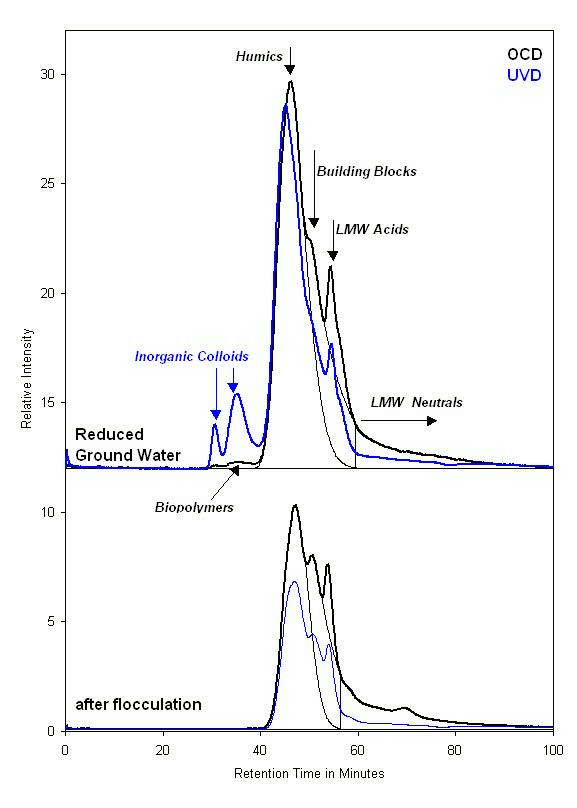 Although the positive impact of sand filters on NOM is their microbial activity, care must be taken to prevent break through of microbially produced biopolymers. If this happens, more biogenic organic matter is found in the effluent than in the influent. 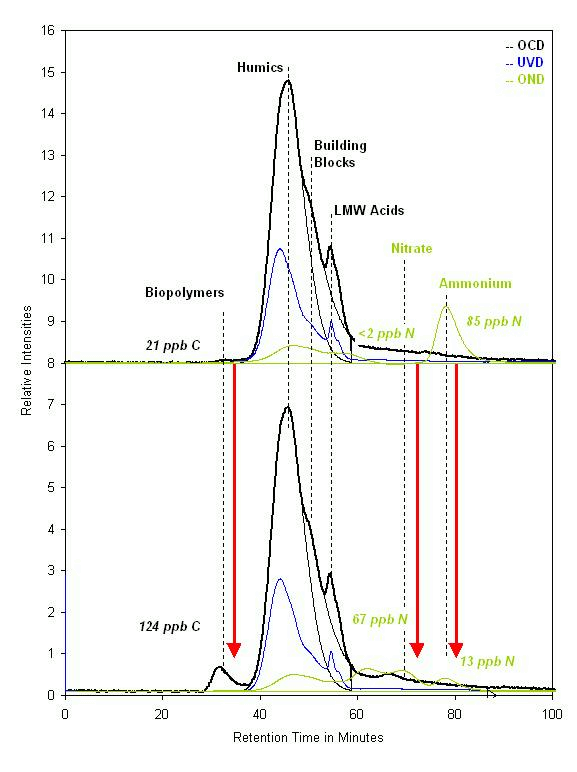 Impact of oxidation on NOM (Ozone)

A humic matter solution was subjected to ozone. While reduction in DOC was slight, humics were strongly bleached (strong reduction in UVD response), Building Blocks and LMW-Neutrals were produced. 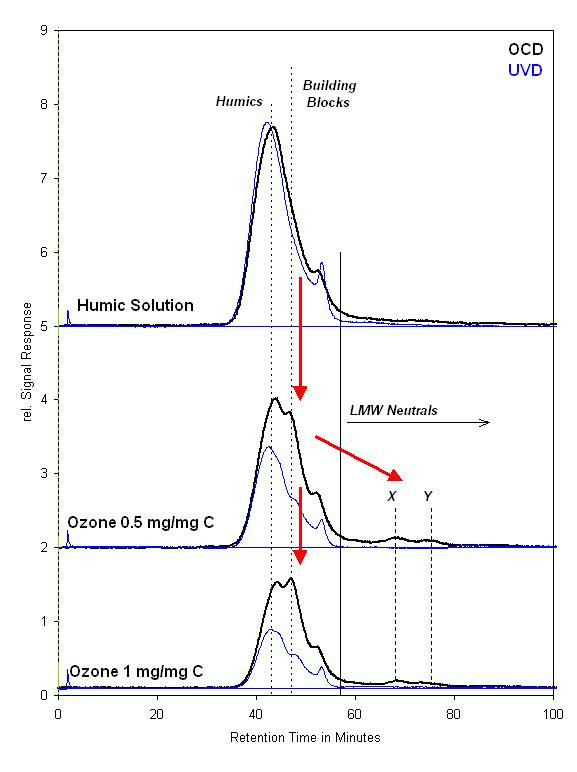 If possible, disinfection should have no, or almost no impact on NOM. In the present case chlorination has only led to a slight decrease in UVD-response, hence to a slight bleaching (de-coloration) of humics. 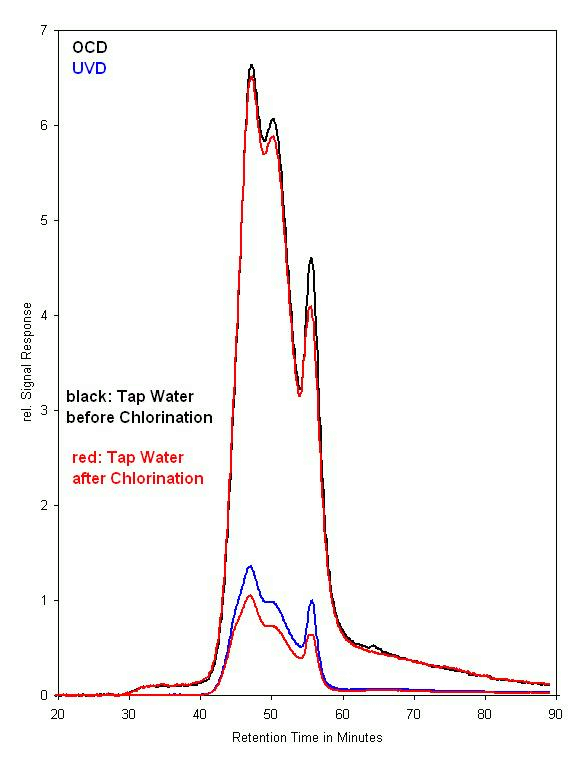 Impact of ultrafiltration on NOM

An UF was installed to remove potentially present cysts of Giardia and Microsporidium. As biopolymers were not present in the feed water, no fouling or blocking of the
UF-membrane is to be expected. 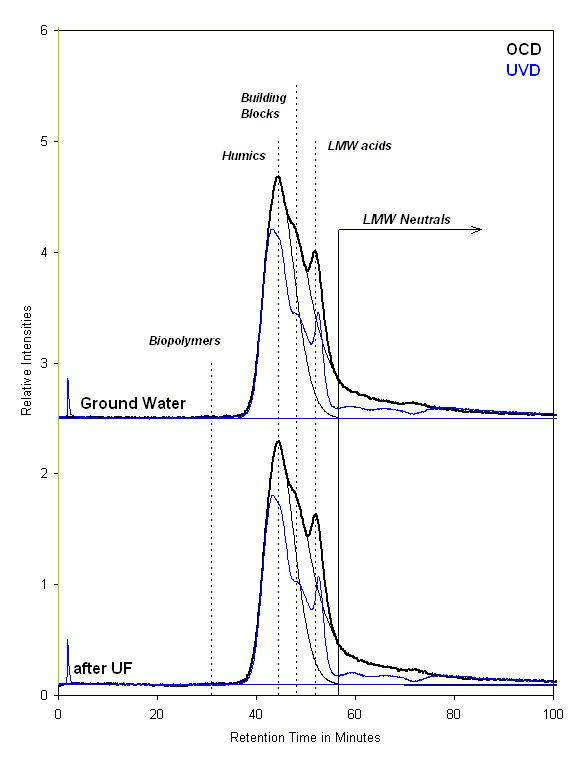 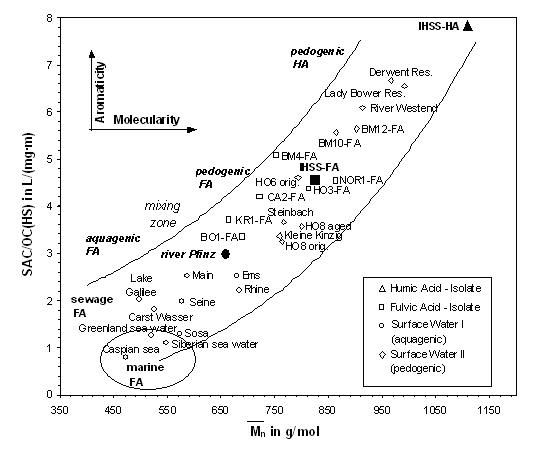 The HS-diagram plots the SAC/OC ratio of the HS-fraction against its nominal average molecular weight (Mn-value). SAC is the Spectral Absorption Coefficient obtained with the UVD. SAC/OC is the specific UV absorption of the HS peak, and a measure for HS aromaticity, considering that the response in UVD reflects aromatic and unsaturated structures. For the range of water samples measured, the SAC/OC ratio was plotted against Mn-values to produce a diagram for which we introduced in 1996 the term Humic Substances diagram or HS-diagram (Huber and Frimmel 1996). As shown, a close correlation exists between HS-aromaticity and HS-molecularity.

Below the position for IHSS-FA, HS of other isolates are found, but also HS from surface waters (e. g. Steinbach, Kleine Kinzig). This area reflects small rivers and creeks whose HS originate from areas with strong slopes. It is assumed that the high hydraulic energy allows relatively high molecular weight FA from soils to be washed into the water body. Often the aromaticity of these FA is lower in comparison to FA from brown water lakes. This is presumably due to sunlight induced bleaching of HS in the photic zone. Although in brown water lakes HS in the upper layer may also be subject to photobleaching, deeper layers are not accessible and the impact will be relatively low.

At the left side of the HS-diagram FA derived from lakes are found (e.g. Lake Sosa, Lake Galilee, Caspian Sea). It is known that in lakes FA are also produced in-situ by microbial activity and are lower in molecular weight than soil-derived FA (Her et al. 2002b). HS from marine environments are also found here. Thus, this area reflects aquagenic, autochthonous FA in contrast to pedogenic, allochthonous FA.

In between the area of aquagenic and pedogenic FA, HS of large rivers are found (e.g. River Rhine, River Seine). To understand their position in the HS-
diagram we have to consider that a large proportion of NOM in many rivers originate from treated and untreated sewage, or Effluent Organic Matter (EfOM). HS in EfOM are a mix of town water HS which are typically of pedogenic FA type. These FA are superimposed by aquagenic FA produced either in sewage plants or in the river itself by microbial activity. Superposition of both species defines this area in the HS-diagram: a mixing zone containing both aquagenic and pedogenic FA. Thus, it can be concluded that the HS-diagram gives information about the origin of HS. The specificity of HS is remarkable and ”hallmarks” natural water bodies. The HS-diagram also can be used to assess the reactivity of HS in treatment processes.